Pay as you go versus intensive 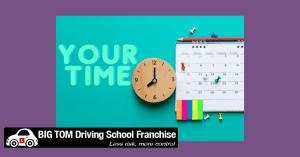 A week of a typical ‘pay as you go’ driving instructor will look like this (this is NOT a BIG TOM instructor’s diary):

So at the start of your week, it looks like you are working with 28 pupils, with a total of 37 hours paid work. However, actually, when you add in your travel time between pupils, you have an added 7 hours of travel. So you are in fact committed to working 44 hours. And with your pricing policy you are expecting to receive £1036 for that 37 hours of work (which is actually 44 hours). Without you even realising it, your hourly rate is actually 16% lower than you think it is.

So that was what you thought was going to happen in your week. What actually happened though was this:

Sunday evening while you were out walking with your family, you received a text from the pupil who was supposed to be starting at 8.30am. They wanted to cancel the lesson, and you end up exchanging 7 texts, using up 33 minutes of your quality family time on the walk (it also put you in a bad mood on the walk which your family didn’t appreciate much).

On Monday, your 6.30pm appointment didn’t show. You waited outside the house, knocked on the door, texted twice, called once and left a message. No show. You get home at 7pm when you could actually have got home at 6.15pm. 45 minutes of your life, you’ll never get back.

On Tuesday, one of your pupils was slow to get to the car. They were running 10 minutes late. You didn’t want to lose this customer as they have only just started with you, so you extend the lesson by another 10 minutes that then makes you a few minutes late for your next customer who thankfully didn’t seem to mind too much. *You hoped*

On Wednesday you got a text at 3.45pm which was the 4pm pupil cancelling the lesson due to illness. You then ring her, and end up speaking to her Mum on the phone who is very upset that you are even thinking about charging her daughter who is ill. She is so upset that she tells you that her daughter won’t be using you any more. You get home at 9.15pm, very tired, having not eaten a proper meal all day, not seen your kids before they got to bed and lost a customer in the process.

On Thursday, everything went pretty much ok until the “facemaskgate” incident. A new pupil had real issues with following your covid safe practices and refused to get in the car wearing a mask.  You had sent two texts explaining the policy but he said he didn’t receive those texts.  You now know why he had left his previous instructor. In any case, it’s another 2 hours lost and that customer who actually never started with you, has also told you he won’t be using you again.

The early start on Friday was a bit embarrassing for you. You got to the pupil’s address on time, but actually, the pupil had texted you in the week to ask to be picked up at a friends house, and you forgot to update your diary. It meant that by the time you got properly started, you actually had lost a half-hour from the session. The pupil didn’t seem to mind, in fact, she found it quite funny. It was still half an hour loss of earnings, though.

Putting aside the text messages, and general aggravation of phone calls that you endured with these pupils (and parents) in your own personal time, you actually had 3 cancellations in the week, lost 5.5hrs of earnings and also lost 3 customers. So your expected earnings for the week was actually 15% lower than your expectations. What is also very troubling is the unpaid effort that went into sourcing the 3 customers who have left you and the lost revenue due to not having their business anymore.

On the plus side, in the week, you gained two new customers. You had dealt with 18 phone calls, 6 emails and in total 58 texts all relating to new enquiries. All of this activity occurred outside of paid driving lessons. You don’t want to think too much about how much of your time you used up talking, texting and sending emails to those potential customers, but you would estimate it was in the region of 3 hours, and much of that was outside of normal work hours – up to 9.45 pm in one instance (which your partner is never best pleased about).

The above is what pain looks like. It looks painful doesn’t it, and it feels painful too. This is the stuff of stress, heart attacks, sleepless nights, lost private time with family, poor reviews on social media, poor diet, lost revenue and what can generally be regarded as an “unsmart” way to work. It looks “busy”, it will no doubt feel busy, there is a lot of heat being created but it is extremely low efficiency. The problem is, the more you experience weeks like this, the more it becomes the norm. This is why small groups of driving instructors congregate at test centres and just moan about pupils. This is what lower league footy looks like, this is not the stuff of premiership football.

If this looks too familiar for your own liking, then get in touch. The BIG TOM Franchise can provide you with a better way of working – there are so many benefits to be had from joining our franchise. You just need to make yourself aware of how much better your job could be.

Without wanting to appear to be disrespectful, make the first smart business decision you’ve made in a while and call us on 01928 508 833

Pay as you go versus intensive